Apple MacBook Air 2022:  Apple introduced the M2 chip and two MacBooks equipped with it. This includes the MacBook Air and the 13-inch MacBook Pro. The new MacBook Air has a 13.6-inch Liquid Retina display, which comes with a 1080p HD camera. Along with this, MagSafe charging has also come. According to Apple, the M2 is more powerful than the PC chips and the old M1. Along with this M2 processor, Apple has also launched MacBook Pro. Whose battery backup has been made much better. The price of the Apple MacBook Air with Apple’s M2 processor is starting from the US $ 1099, while the starting price of the MacBook Pro comes with an M2 chipset and has been kept at the US $ 1299. 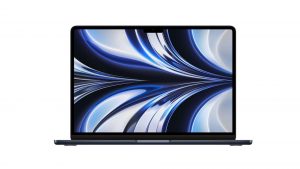 The display of the MacBook Air 2022 has also been enlarged and now it is coming with a 13.6-inch display. Along with increasing the size of the display, the bezels have also been reduced. There is a notch in its display. After making all the changes, it gives the feel of a 14-inch MacBook Pro. The new MacBook Air is slim to 11mm and will come in four colors – Silver, Space Grey, Starlight Gold, and Midnight Blue. The MacBook Air M2 2022 includes MagSafe charging, two Thunderbolt ports, and a headphone jack.

The thickness of the MacBook Air is only 11.3 mm thin. It has a magic keyboard with a Touch ID power button and a secure option for magnetic safe charging. Apple company claims that the battery of the new MacBook Air can work for about 8 hours. 67W fast charging support is also provided in Apple MacBook Air for power, and the company claims that it comes with 18 hours of battery life. Let us know that users can charge two devices simultaneously. Four speakers have been given to MacBook Air. It also has a headphone jack, which supports high-impedance headphones.

The MacBook Air M2 has been listed on the official Apple online store in India for a starting price of Rs 1,19,900. This is the price of the base variant (256GB). Users can also choose more storage variants, for which a higher price will have to be paid.